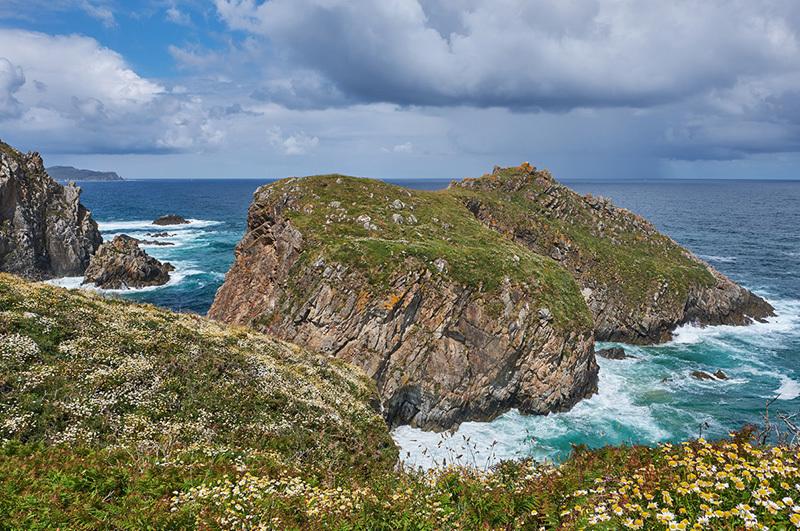 Pena Lopesa is the remains of an ancient fortified castle and a medieval fortress which disappeared due to sea erosion.

It is one of the many Galician castles destroyed in the Iron Age by boulders on the promontories of the Atlantic coast.

At the end of the Middle Ages or in the Modern Age, marine erosion separated the Pena Lopesa from Monte da Lagoa, forming a rough and inaccessible peninsula going deep into the sea with vertical walls of 42 meters high. Originally, the Pena was a source of freshwater.

The small road that goes from Pena Molexa to Pena Lopesa is one of the most beautiful and interesting parts of the route that leads to San Andrés de Teixido. Great unspoiled nature, pervasive in the Atlantic Ocean and the Valle de Trasancos, floods the senses in just over a kilometre and makes it a unique place, unchanged over the centuries.

With views over the Atlantic Ocean, we can undertake the dangerous descent to the cliff to contemplate the impressive Pena Lopesa: the remains of a coastal castle, disappeared, and almost turned into an island by the action of the sea. A great cleft separated Pena Lopesa from the Montes de Vilarquinte forming a peninsula as it collapsed, a cliff of inaccessible vertical walls.

Pottery and other remains were found, confirming its occupation around the change of the era.

Lopesa is one of the hundreds of Atlantic castles destroyed by the force of the sea, about which sailors tell old stories in the long winter nights.

Legend has it that at the time of the "Mouros" (Galician mythical beings), a powerful king guarded a fabulous treasure at Pena Lopesa.

The king went hunting in the mountains of Vilarquinte, raising a drawbridge and turning the horseshoes of his horse to deceive the enemy kings who wanted to steal his treasure.

One day, these kings gathered a large army and camped on the mountain, facing Lopesa. After years of siege, and almost on the verge of surrendering due to hunger, the king of Lopesa offered the birds his last bushel of wheat. Then the besiegers lifted the siege and left, thinking that the Mouro King had food for many years.

LOPESA BEACH
Lopesa beach is 20 metres long and at least 10 metres wide, with wide variation due to the tides. This beach is made up of pebbles and rocks from the frequent landslides of the coast. It is very difficult, and therefore not advisable, to access.